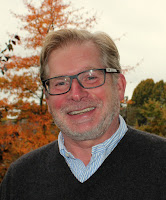 I'm the President of Vancouver-Langara BC NDP, and I've been actively volunteering my time with the riding for over a year. It hasn't been easy. The other side raises more money and gets more media coverage. We struggle. Especially in a constituency that has never elected a New Democrat. Ever.

Tonight, on the eve before Christmas Eve, and Hanukkah, my colleagues and friends at the BC NDP, posted this meme on our party's Facebook page.

I couldn't help but smile. And laugh. I'm in the right party. 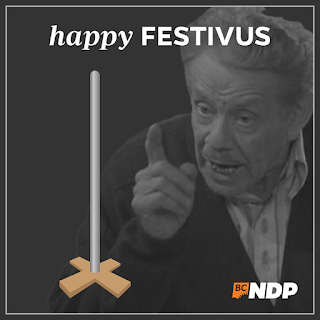 And while we gather around that Festivus pole for the airing of grievances, let's remember the most important poll we face is coming up May 9th. Join us. We're in this thing together. With laughter. 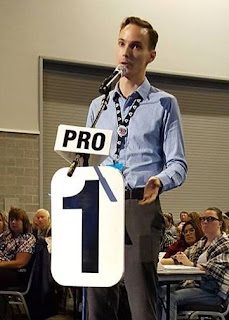 Stefan Nielsen is a union activist, a concerned citizen and Vice-President of the Vancouver-Langara BC NDP.

He joined the BC NDP some years ago, but became more active locally in Vancouver-Langara in 2016. At the AGM he was elected our Vice-President and is active knocking on doors and speaking to people about the BC NDP at every opportunity. 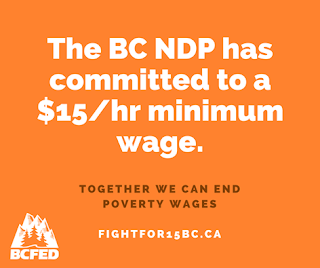 In Stefan's words: "I was 19 when the BC Liberals first took power, so nearly all my entire adult life has been lived under their government. I've watched as the prosperity my parents enjoyed when they were my age slips further and further out of reach as housing and education have become prohibitively expensive and wages have stagnated. I see friends and co-workers slaving away at work that only serves to keep them in poverty."

"We're long overdue for real, positive, change for working people and I know that only John Horgan and the BC NDP can deliver it in British Columbia. And I want to be a part of it."

Change is coming to BC May 9th, 2017, and Stefan is a part of that change. You can join Stefan and others in your community by joining our movement for social democracy.
at 5:38 PM No comments: